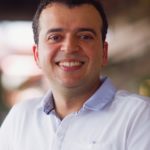 Thiago Abreu received his degree in Computer Engineering in 2009 and his M.Sc. degree in Electrical Engineering in 2011, both from Universidade Federal do Pará (UFPA). He obtained his Ph.D. degree in Computer Science from Université Claude Bernard Lyon 1 (UCBL1) in 2015 on the field of modeling and performance evaluation of multi-hop wireless networks. While finishing its thesis, he spent 1 year as a research engineer at the Laboratoire d’Informatique de Paris 6 (LIP6) at Université Pierre et Marie Curie, where he continued his researches on the field of cellular networks. Shortly after, he started a 1-year post-doctoral fellowship at IRISA Rennes, mainly in the field of performance evaluation of information-centric networking. In September 2016, he became associate professor at the Université Paris-Est Créteil (UPEC) where he teaches at the Ecole Publique d’Ingénieurs de la Santé et du Numérique (EPISEN). His research interests are currently performance evaluation and system modeling in the area of sensor wireless networks, applied to e-health systems and body-area networks. His research is performed in the Laboratoire Images, Signaux et Systèmes Intelligents (LiSSi).